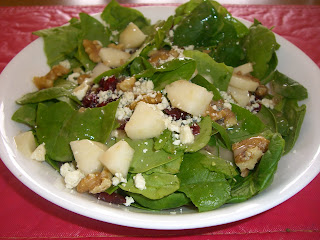 Yeah!! Another salad! I am so happy that Kim is so cool with having salad often. Its funny because cool and interesting salads are what I usually order when dining out, and now I just create them at home, and Oh My Godness, for a fraction of the cost. This salad was actually Kims idea, and I am happy I used up blue cheese from last week and walnuts. I also wanted to get even more nutrients in the meal, so I added a whitebean crostini to the mix. The white beans I had boiled and frozen two weeks ago, when we had pasta with beans and spinach.
I also had a bit of leftover meatloaf and potatoes, which Michael had along with the salad. The "bean crostini" was in no way passing his lips, however, it gave me an idea for next time I make "mystery" mashed potatoes. I guarantee he will never know..... 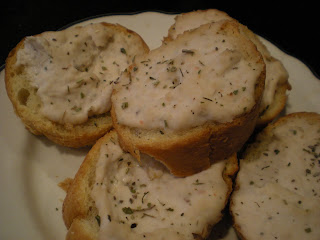 White Bean Crostini 16 oz can of white beans.69
1 tsp olive oil.20
1 tsp rosemary.05
salt to taste
Total $7.12
Combine all ingredients in a food processor or blender
Loaf of french or Itaian bread sliced thiny$1.99
1/4 cup olive oil .20
brush oil on bread and toast at 300 for 10 minutes or until crisp
spread bean dip on each toasted slice of bread
Posted by barbara at 10:29 PM