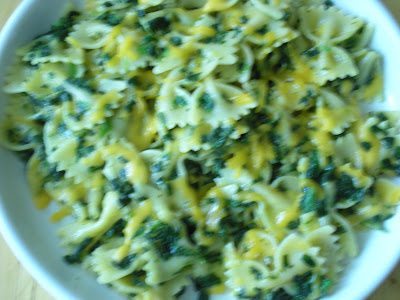 We promised it would be back and it is. Our healthy, homemade version of mac and cheese. Kim and I believe there is so many ways to vary this recipe, but I decided to go with spinach this time because suddenly Michael cant get enough spinach, and I cant get enough of him eating eat!!
Ingredients:
12 ounce small noodles .90
1 1/2 cup reduced fat cottage cheese.99
1 tablespoon flour.05
1 1/2 cup milk.20
1/2 tsp salt.05
1/4 tsp black pepper.02
1/4 tsp cayenne pepper.02
1 1/2 c shredded cheddar cheese.90
2 tablespoon dijon mustard.10
2 tbsp plain bread crumbs,20
2/3 thinly sliced green onion(optional).10
1 lb frozen spinach $1.19
boil noodles according to instruction
in food processor or blender, blend cottage cheese until a smooth consistency
in the meantime in large skillet, combine milk and flour and heat on medium, stirring constantly until it forms a smooth even consistency
add cottage cheese puree, mustard, cheese, salt, pepper, cayenne, onion and stir constantly until it forms a smooth, cheesy sauce, add thawed out spinach, mix thoroughly
remove from heat
place noodles in a large baking dish, mix in sauce, until noodles are completely coated
top mixture with breadcrumbs
and bake at 300 for 15 minutes, until top noodles are slightly brown and crispy
Posted by barbara at 3:02 PM No comments:

The Waldorf Salad was created in 1893 by the Maitre D of the Waldorf Astoria Hotel in New York City. The Mainstay of the salad is apple, celery, and mayonaise. Other added additions are red or green grapes, raisins, chicken, turkey, even yogurt in place of mayonaise. I personally am not a huge mayonaise fan, so I woud opt for yogurt instead, but it does seem that mayonaise is the tradition.
This recipe seems to be a bit more appropriate for lunch, then a dinner salad. I am not including chicken in mine, but I do think the chicken turns it into more of a meal by adding the protein. Ingregients:

Combine yogurt and lemon(to be used for dressing)
toss first four ingredients together in a bowl, add dressing and mix well
serve on beds of lettuce
Posted by barbara at 5:07 PM No comments:

Email ThisBlogThis!Share to TwitterShare to FacebookShare to Pinterest
Labels: salad

Well I was having blogger trouble today, so this recipe is going up long after I had the Salmon for dinner, and its a good thing because not only did I not post recipe before I made it, I also couldnt get a good picture because my not so hightech camera was out of focus and I, being not so hightech, couldnt figuire out how to adjust it. Michael, my 11 year old, usually adjusts my camera while playing with his I touch, watching a Baseball game, and dribbling a basketball, all at the same time. That brings me to a sadder topic, Michael who just finished the 5th grade(ugh!! where did the years go?) had his first, well technically second, boy girl party. It is actually his second, but the first doesnt count because it was last year when he was still like "girls-yuck !". He never utters that word now in reference to girls. He says things like- and very nonchalantly, I might add "oh, girls going to the party, thats cool". Today when I dropped him and his buddies off at the party, he didnt give me his usual "bye mom, I love you", it was more like "hey, see ya later", and at that, he was off, to a world I remember like it was yesterday, and a world where "mom" was no longer number 1, but a means of transportation.
So at that, I came home and made my Horseradish Encrusted Salmon, cinnamon sweet potatos, and brussel sprouts, and enjoyed a nice healthy, welbalanced meal by my lonesome. I will say, I am a huge horseradish fan, and the salmon was awesome, and Im going to have to make it again, and soon b/c I want to put up a picture, and Ill have no problem eating that salmon again. yum! Here is the recipe, and hopefully it wont be too horseradishy for others, but I just love the strong horseradish taste.

combine all ingredients other then salmon in a bowl, it should form a paste
spread topping evenly on each peice of salmon
place on a baking pan and place in preheated oven(350) for 10-15 minutes, until fish is cooked, or flakey to the touch
For potatoes
peal two large or 3 medium sweet potatoes .80
1 tablespoon olive oil .25
1 tsp salt .02
2 tsp cinnamon.10

slice lengthwise like frenchfries, or horizontally like discs
place on baking pan
coat in olive oil, salt and cinnamon
bake at 350 for approx 15-20 minutes
Posted by barbara at 8:56 PM No comments: 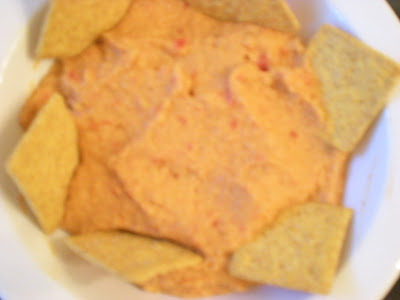 I was grocery shopping with my partner in being "thrifty" crime, Kim, and she was raving about a Trader Joes Hummus, and it reminded me of my own hummus recipe. I went through a huge hummus stage, where I was making and eating it all the time, to the point where I got tired of it. That was years ago, and now I am itching to try have some again. I made several versions of the chickpea recipe, my favorite being the red roasted pepper combo, so I thought we would have that tonight it can be served with pita bread, crackers, or if one wants to limit the carb intake, it can be served with veggies, such as celery, carrots, peppers etc....

simply combine all ingredients in food processor, and blend until smooth

cut up pita bread into wedges and place on cookie sheet and warm for 5-10 minutes in oven
Posted by barbara at 7:17 AM 1 comment: