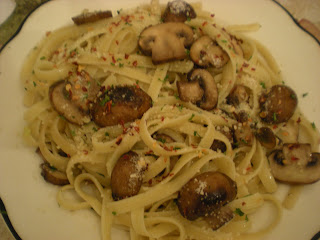 Some meals make me think of Italy, and when I think of Italy, I alway think of my dad because he was a man who embraced America when he migrated here at the age of 27, but he never, ever forgot his true Italian roots. He was a struggling laborer when he came to America, but every couple summers, he found a way to scrape enough money for us to go back to Italy.
All day today, I had on my mind, the"best" pasta dish I ever had in Italy. When I was in my 20's I went to Italy just my dad and I. A group of us, including my dad, had been driving back from a mountain climbing excursion, and we decided to stop to eat. We were winding through the mountains and came upon a little town of about 5 houses, so I was baffled when my cousin pulled into the tiny brick street and parked and said "lets go eat". I said "where?" he pointed to a little brick house, and sure enough there was a little sign outside the door that said "Ristorante". We were greeted at the front door with giant smiles by a women and two kids, and were escorted to thier diningroom. We were immediately served warm crusty amazing bread and olive oil the color of green gold. The women tells us the "primi" course for the day is pasta con funghi(mushrooms), we are all onboard with that. If one is lucky enough to travel to Italy, they will learn very quickly that there are many courses to Italian meals. A normal meal would be a pasta course, and then a secondi, which would be a meat, poultry, or chicken. Then there is the antipasti(before the pasta) part of the meal, which consists of meats and cheeses usually. OK, the eating traditions in Italy is for another blog, if anyone is interested. Long story short, the pasta that came out of this womens kitchen, prepared by her husband and served by her children in thier home was simply amazing. The noodles just melted in my mouth as they took on the flavor of the mushrooms. It was prepared with a delecate amount of olive oil, garlic, red pepper and topped with fresh parm cheese. I love mushrooms, and have had this dish many times, but never do I remember it tasting like it did that day in a small mountain town of abruzzo, in the middle of nowhere. When the women came out to take our order for our secondi, it was unamimous that we all wanted a second helping of pasta funghi, and we all skipped the secondi. I really didnt have any vegetables for tonight, so I splurged and went to local grocery store and bought porcini mushrooms and got some good parm cheese from my sister inlaw who always shops Costco for Italian cheese, pulled out a really good bottle of olive oil that I recieved, and made my beloved Pasta con Funghi. I thought it was pretty darn good, was the "best" meal I ever had- no, but for a moment I was back in a place I havent been in years to, and a mountainous place tha will never be the same without the man who moved mountains, my dad.