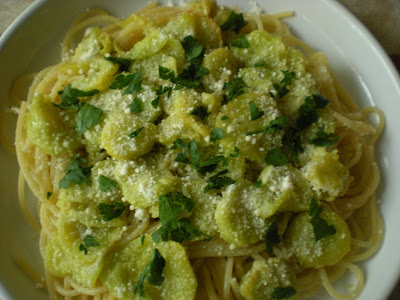 OK, Kim laughs a lot at me when Its my turn to choose a meal, because she thinks garlic and olive oil with pasta and some kind of veggie is my "go to" meal. However, the truth is, I just love the whole combo, and because I love vegetables, the possibilities are endless as are the combinations. So tonight is pasta with zucchini, but watch in the next few weeks what I come up with, if I dont get vetoed. Here's the very simple but delicious recipe

Begin by cooking pasta
peel and slice zucchine thickness of a nickle
heat 2 tblsp oil in large skillet on low, add onion until soft and glassy 10 minutes
add minced garlic, saute on low with onion 5 more minutes
add zucchini salt and pepper, saute unitl zucchini slightly soft and glassy, remove from heat immediately(zucchini can become soft and mushy if over cooked even slightly)
when pasta cooked drain and toss in skillet with zucchine, add tablespoon of olive oil and saute for a few minutes
serve in individual bowls with parsley, parm cheese and red pepper(if desired)
enjoy
brought to you by The Fit, Fast and Frugal Foodies
Posted by barbara at 10:43 PM 2 comments:

Email ThisBlogThis!Share to TwitterShare to FacebookShare to Pinterest
Labels: pasta 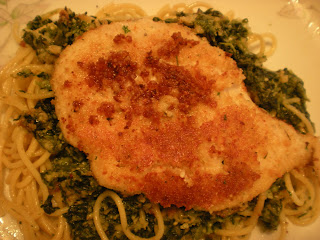 I dont know how I came up with this dish because although it was my idea and Kim and I talked about recipes for this week a week ago, I didnt know much about this recipe, except that it was a chicken dish served with spinach. I started researching it yesterday at about 4:00, and actually had to make it yesterday along side the Chefs salad b/c tonight I wasnt going to be able to. First, I have to say, in my haste to cook and eat and get out the door before 5:30 to get to my sons first baseball game of the season, I didnt realize the memory card was out of my camera(boo hoo!)so no pictures, but I will make the chicken again b/c it was awesome.
I dont know the root of Florentine, I would have assumed Florence Italy, but that is not documented anywhere. I do know it is made with a cream sauce usually or a bechemal sauce, which freaked me out because I dont like using cream, and combined with butter is just scary!! So I scanned the internet and found a recipe where milk is used and not cream, I used 1% milk.
Ingredients:
3/4 bread crumbs .30
1/4 cup parm cheese.20
1 lb frozen spinach $1.19
4 chicken breast$3.15
1/2 medium onion.10
2 tbsp butter.05
2 tbsp flour.05
1 cup milk.15
1 bayleaf(optional).05
salt and pepper
1/2 lb linguine, spaghetti, fettuchine.59
2 tablespoons olive oil.15
garlic salt.05 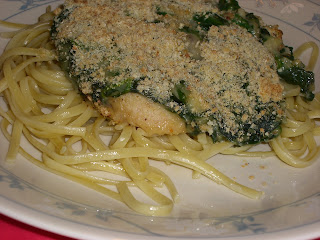 serve chicken over noodles
Yummo!
brought to you by the fit, and fast frugal foodies.


The Heron's have never made Chicken Florentine before, and I'm not sure I've ever eaten it before either.  Therefore, I didn't really know how to plate it or serve it.  I thought the recipe said to put the spinach on top of the chicken, which I did.  But somehow Barbara got hers flipped before photo-ing it.  Anyway, we did really enjoy it, and will likely partake another time.
Posted by barbara at 2:12 PM No comments:

Email ThisBlogThis!Share to TwitterShare to FacebookShare to Pinterest
Labels: poultry 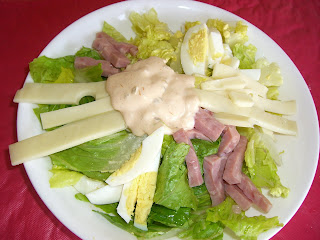 This is probably the most famous salad out there, and the one that is most commonly found on menus. The history on the salad is a bit sketchy, but sufice to say it was created by a "chef", sometime in the 1930's. The vegetables vary a bit, but the constants seem to be iceburg or romaine lettuce, hard boiled eggs, deli meat and slices of cheese cut in strips. The dressing also varies. Some say tradition dictates thousand island, some say french, I personally prefer blue cheese, balsamic combination.
This is what I am putting in mine
chopped romaine$1.20
tomato.20
cucumbers.10
hard boiled eggs(2).16
ham .60
swiss cheese.40
olives.30
dressing of choice 1/2 cup bluecheese .45
2 tablespoon balsamic vinegar .20
If I had some I would include avocado
other ideas:
turkey
bacon
cheddar cheese
provolone cheese
beets
carrots
anything that sounds good.....
Posted by barbara at 2:59 PM 1 comment:

Email ThisBlogThis!Share to TwitterShare to FacebookShare to Pinterest
Labels: salad 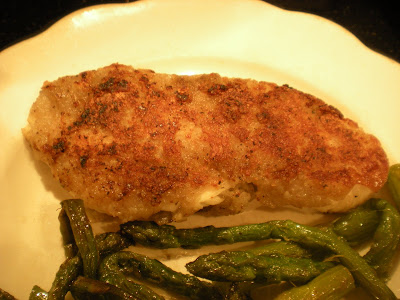 OK, so I found a recipe for this awesome sounding fish in a magazine, and then I couldnt remember the magazine, so I went on the internet to find a similar recipe. I thought the recipe called for dry potato flakes so that is what I purchased and then I found a bunch of recipes that used real potato shredded...and I always like the real deal, so that is what I went with. Most recipes called for frying the fish pieces, so that is what I did. I thought the results were less then exciting. Ontop of tasting kinda bland, the potatoes still had that raw potato taste. I dont think frying up shredded potato for 6 minutes is enough time to cook it, and if the fish was cooked any longer then that, it would have started to really flake. I also would include more seasonings in the potato mixture, and possibly some bread crumbs b/c the potatoes were really wet. Kim is going to use the potato flakes to make the dish, so I am curious of the results. The potato wont taste raw that is for sure.
ingredients
4 white fish filets(thawed)$1.98
2 medium potatoes .35
1/4 cup horseradish mustard .20
1 tsp onion powder.05
1 tsp garlic powder.05
salt and pepper
1/4 cup olive oil.10


peal and shred potatos very thin
dry any moisture from fish
coat whitefish with horseradish mustard
encase the entire filets with potato
sprinkle each with the onion powder, garlic powder, salt and pepper
heat oil in skillet and turn oven to 350
when oil hot place fish in skillet
brown on each side atleast two or three minutes
remove from heat and serve with melted lemon butter(or just lemon wedges)
Im baking two filets to see how they come out(potato probably wont be as crispy, even if I spray some olive oil on the potato)
We shall see
Posted by barbara at 1:04 PM No comments:

Email ThisBlogThis!Share to TwitterShare to FacebookShare to Pinterest
Labels: fish 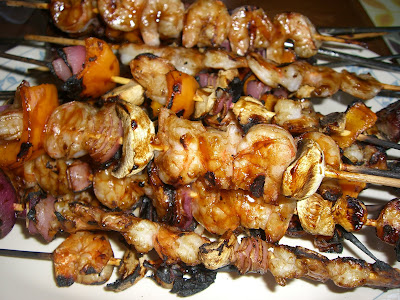 mmm.  I love grilled shrimp - and what a pile of meat we have in that picture.  So yummy, good protein, low in fat, no carbs - and taken in moderation, the cholesterol and sodium won't get you too much either!  Then we take these little beauties and pair them with good, wholesome veggies - we're going with the traditional peppers, red onions, and (orange) peppers - though yellow or red would have been super too.  Tomatoes would go nicely as well, if you like them - I"m not crazy about them so they weren't a part of mine.  ALSO, AMAZING on the grill is grilled pineapple.  Either skewered with the kabobs or alone with just a drizzle of teriyaki marinade - or a teaspoon or less of brown sugar.  Delicious!
We asked you to buy raw shrimp - the grey icky looking ones, not the pink and white ready to eat kind.  The ready to eat kind will get way too dried out on the grill, it's important to use the raw kind for this type of cooking.  Bigger shrimp are going to take longer to cook, and thus be easier to match the timing with the veggies - otherwise, with small shrimp you might have crunchier veggies - which is not a big deal, just maybe crunchier than you'd like.

Thaw the shrimp by either refrigerating for 24 hours or thawing in running cold water for five minutes (gues which method I use most often :-).)
Depending on the size of the mushrooms, peel, wash, or just wipe clean, then cut into a size that is close to that of your shrimp.
Cut the peppers into chunks that are approximately the same size as a shrimp
Cut wedges of onions that are "approximately the same size as the shrimp"
If you have zucchini or yellow squash or other colored peppers or tomatoes, throw them on too.  It's just easiest if everything is about the same size. 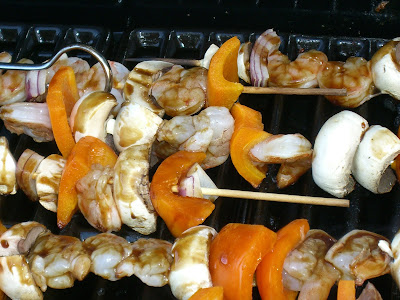 Skewer everything in whatever order you want - there's no wrong way to put meat on a stick.  Alton Brown might disagree with me, but that's what he's paid to do, so if you like his humor better, watch him.
Finally, drizzle some Teriyaki marinade over the finished product, allow to sit for about 5 to 10 minutes while you heat up the grill, then...
The skewers need to be put on the HOT grill, then turned every about four minutes (whenever the meat isn't stuck to the grates anymore).  Remove after about 10 to 12 minutes - obviously depending on the size of the shrimp and other items.  Let the skewers cool - ESPECIALLY if you have metal skewers - I have a variety of each in the above pic, and anything will work, but the metal ones are SUPER HOT!!!
Serve with grilled pineapple slices and rice.  MMMM it's so good!
Posted by Kim H. at 9:11 PM No comments:

Email ThisBlogThis!Share to TwitterShare to FacebookShare to Pinterest
Labels: seafood 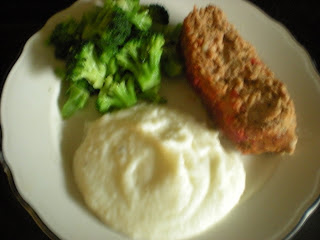 In a large mixing bowl, combine ground turkey, onion, egg whites, salsa, oats, soup mix, and black pepper.  Press firmly into a 9" by 5" loaf pan and spread ketchup over top. Bake in preheated oven until meatloaf is no longer pink in the center and juice is clear - 60 min.

Email ThisBlogThis!Share to TwitterShare to FacebookShare to Pinterest
Labels: poultry 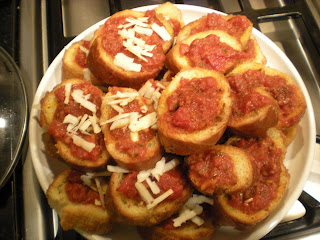 If anyone was wondering the difference between Crostini and Bruschetta, they need not look much further then this blog. In my extensive studies(haha), I have found the differences to be slight, and actually only the preparation is a bit different.
For those that dont even know what the heck these two Italian sounding items are, the main ingredient and constant variable is slices of Italian or French bread.(and how can anything be bad that includes Italian or French bread?)

Crostini by Italian definion means "little toasts". Italian bread sliced really thin, and drizzled with olive oil, garlic, salt and pepper and toasted in oven until crisp. Then toppings can be added on- vegetables:spinach, mushrooms, peppers, or meat such as proscuitto, or cheeses melted. Crostini is similar to an american version of a crouton, except the bread is not cut into small pieces, they are round slices.
Bruschetta on the other hand comes from Italian word 'bruscare' meaning to roast over coals. Rather then cook the italian or french bread in the oven, the bread is cooked over open flame in a fireplace or in more modern times on the grill. The bread is also drizzled with olive oil, garlic, and salt and pepper, but the bread is cut much thicker. The same rules apply, the bread can be topped with what ever appeals. The most common bruschetta in this counry is Tomato, Basil, Garlic and olive oil, that is espcially great with tomatos from the garden in the summer.
So today I am going to prepare a crostini because I am crisping the bread in the oven, not over a flame, and the bread is sliced really thin.
I think it is important to note that the pronunciation for Bruschetta is Bru-sket-ah. The "sch" is hard sounding, not soft. OK, that said, here is the oh so simple recipe for Crostini:

For topping
I accidently opened jar of black olives instead of black beans, so rather then eat the whole jar(and i could),I decided we going to make Olive Tapenade.
20 black olives pitted and chopped in really small pieces.99
1 tablespoon olive oil.10
2 tsp minced garlic.20
1 tsp dry or fresh parley.05
salt and pepper

combine all ingredients together
spread evenly on toasted bread
Posted by barbara at 3:01 AM No comments: