In this blog from a few months ago we taught you how to make a very healthy coconut shrimp that I got from Weight Watchers a LONG time ago!  It's really tasty, easy, and really doesn't pack any bad fats as it is baked!  The coconut makes it so sweet and the beer combined with the baking powder in the batter makes a really crunchy but light batter.

we're going to jazz it up ALOT by making this hot mango/pineapple dip for it!

combine pineapple and mango in food processor or blender.  Mix/mash/puree/blend - whatever it is you call it, mix these things together creating a pretty thin sauce with a beautiful color.
pour into a bowl and mix in the red pepper flakes and the corn starch.  Refrigerate about 30 minutes for the corn starch to thicken the mixture a bit.

Serve cold or heat the dip in the microwave to accompany the shrimp!
Posted by Kim H. at 10:21 PM No comments: 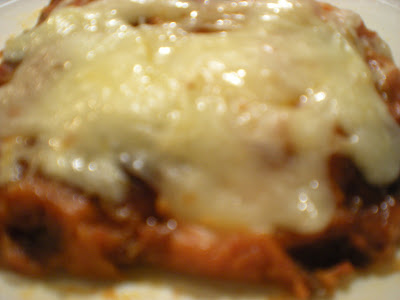 The name of this gives the implication that it is a lasagna with zucchini, which it is, however the trick here is the zucchini is used in place of pasta noodles. It is strictly a coincidence this week that we replaced two typical pastas with imposters, which happens to be vegetables! The first time I made this, it was a soupy mess, good, but a mess. I had read that sprinkling the vegetable with salt and letting them sit for 10 minutes or so, helps to eliminate of a lot of liquid that vegetables tend to contain, and it does, however, their was still more liquid to be had, and when baked in a pan with sauce, which is a liquid and cottage cheese, the zucchini became even wetter and the rest is history-soupy mess! So not to be daunted, I was thinking about it all night, and although the recipes I found did not say to cook the zuchini prior, I decided it was a good idea, and that is exactly what i did second time around, I lightly salted the zuchini strips, let them sit 10 minutes, then broiled them. This eliminated much of the moisture, but shrunk the zucchini, so I did have to go get another zucchini at the grocery store(and running to the store last minute is my pet peave in life, but I was on a mission) So I grabbed another zucchini, sliced it thin, salted, and broiled the stripes. assembled Lasagna, and baked. The result- less of a soupy mess, but still didnt hold up like I would want a lasagna to. Im on a mission though, and I am going to make it again, this time adding more parm cheese and bread crumbs with the cottage cheese, and eliminating the egg, so it will be drier..... I really want to master this lasagna because it was delicious, and very light tasting, yet it gave me the illusion of eating a pasta dish, but without all the gluten!

In a sauce pan brown meat and season with salt

drain in colender to remove fat

return meat to pan and add tomatoes and salt and pepper

meanwhile, slice zucchini 1/8 inch thick(if you have a mandolin that would be helpful)

salt zucchini and set aside for 10 minutes, zucchini has lots of water, if salted it helps to remove alot of moisture

sprinkle parm cheese on the final layer
Posted by barbara at 8:38 PM No comments: 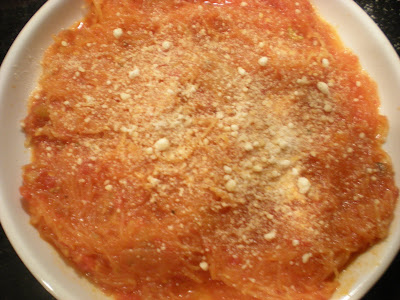 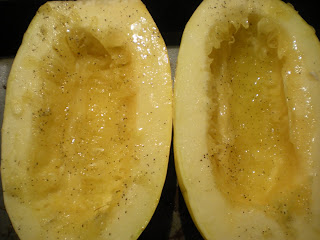 A flourless pasta you say? yep. Ive been thinking of trying spaghetti squash for a long time, and I finally did! It was interesting, and definitely light tasting. I love pasta, always have. I Grew up eating pasta 2 to 3 times a week, but truthfully I cant do that anymore. Carbs are good because they are fuel for the body, but only in moderation. I always feel kind of weighed down after a pasta meal, but not this time. The squash "noodles" kind of take on the flavor of the sauce, which can be good or bad, depending on how good the sauce is. I went with my favorite sauce- arrabbiata, because I knew if I didnt really like the texture of the noodle, the sauce would keep my taste buds happy. I was right. I did make the sauce really spicy for myself and the noodles definitely got over powered by the heat, but I think that is why I liked the squash.
I had to look at the internet for instructions to make the squash, and I had a few options but I went for baking the squash not boiling.

for squash:
preheat oven to 375
slice both squash in half lengthwise, scoop out the insides including all the seads
drizze with tabespoon olive oil(1 per squash) and season with salt and pepper
place in baking pan or cookie sheet and bake for 30-40 minutes
remove from oven when the sides can easily be separated, scoop out all the "spaghetti" and with a fork or your hand separate the noodles because they clump together
leave noodles aside
For the sauce:
in large sauce pan heat oil
add garlic and saute on low(careful not to burn)
add crushed tomatoes and sauce
simmer on low for 30 minutes
add red pepper flakes and simmer 30 more minutes
add salt and pepper to taste

turn off heat, add squash to sauce and saute together for a few minutes
serve with parmesean cheese
Posted by barbara at 4:06 PM No comments:

Email ThisBlogThis!Share to TwitterShare to FacebookShare to Pinterest
Labels: pasta

Not much of a secret what's going to be in this salad is it?
we searched out this awesome sounding recipe with a yummy soundng dijon dressing from scratch - sounds great, and we're super excited to have this during Biggest Loser night!

mix dressing - allow to flavor through for a while!

Set 4 plates with field greens with meat & artichokes, drizzle with dressing and enjoy the savory combination of flavors.
Posted by Kim H. at 2:33 PM No comments: 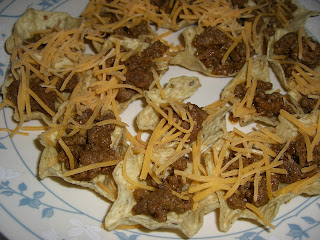 A fun twist on taco bar, this is really just a different shell for tacos - but your kids won't know that unless they can read this blog or you tell them. Tostitos brand scoops are super for this dinner. Barbara and I have also served them at a party with just a squirt of sour cream in the bottom of the scoop and a spoonful of salsa (preferrably a corn and bean salsa) on top of the sour cream. Tonight we're doing the scoop as dinner!

taco fixings of choice - we went with cheese, lettuce, sour cream, guacamole, salsa. This platter just shows sc oop tacos with meat & cheese - that's how I put them all on the table and then all the "fixings" along side so each person can make their own to taste. It's a bit messy of a supper, but it's a lot of fun, and the kids seem a bit more talkative about their day when we're having a fun supper!
Posted by Kim H. at 2:28 PM 1 comment:

Here's what you'll be buying for a full week of meals this go-round: 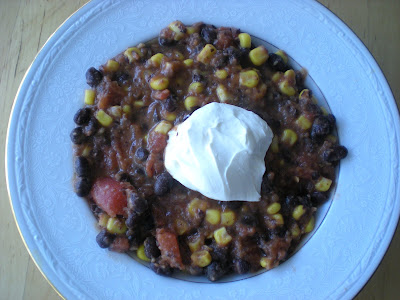 Kim and I make this Southwestern salad that I absolutely love! It is absolutely in my top 10 faves of the past year, and when I have an opportunity to make the salad ie if Im having a party, or going to a pot luck dinner, I always bring the salad because in this year of blogging we cant have any repeats for dinner, and its a rule we are trying to stick to, but I really enjoy this salad, so I find reasons to make it. So when I stumbled accross this recipe for Southwestern blackbean soup and noted many like ingredients, I was sold. We made black bean soup a few weeks back, but this version is very different, the corn added to the beans gives the soup a much chunkier stew like consistency and the taco mix kicks up the flavors a notch and gives it the southwestern flair. Cheese and/or sour cream optional, but not necessary, the soup is that good on its own.

heat oil in soup pot on low
add onion, saute a few minutes
add broth, one can beans, taco mix, and saute 5 minutes
in food processor blend 1 can beans and tomato until it is a smooth, thick puree
add to soup, add pepper to taste
bring to boil, and simmer for 30 minutes

Divide into 8 bowls and serve.
Posted by barbara at 11:04 PM No comments:

We had a bit of fun researching and dreaming up this menu - we've done more than 400 posts to this blog since late December... it's been a great experience for me and my family, and I thank Barbara for going down this avenue with me.  It's been wonderful!

Email ThisBlogThis!Share to TwitterShare to FacebookShare to Pinterest
Labels: MENU 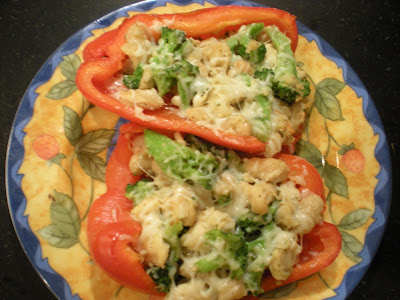 I found this recipe on one of my favorite Blogs - Ginas Skinny Weight Watchers Blog. I love this blog because the recipes are great and she focuses on healthy and not so high caloric meals as wekk as detailing all the WW points, so anyone counting points has the work done for them. I already stuffed peppers a few weeks back and liked it so much, I am going for it again! This time around I am incorporating some protein coming from chicken, and vitamin C and K coming from brocolli, and lots of fiber coming from white beans,. So for the vegetarians out there, the chicken can be ommited, and there is still plenty of protein to be had>
2 red peppers or green will due as well$2.99 (I used red peppers, which are usually more $)
1 medium onion diced .40
3 cloves garlic minced .20
3 tablespoons olive oil .30
1 tbsp fresh rosemary or dry
1 cup frozen brocoli florets fresh or frozen(frozen thawed).40
1 can 15 oz of white beans drained .69
2 chicken breasts cooked and shredded(bake in oven for 15 minutes at 350 $2.13
salt and pepper .10
1 cup cheddar cheese$1.30
in saute pan heat oil and saute onion for 5 minutes on low, add garlic, saute until onions are glassy
add chicken, rosemary, brocoli and beans saute for 5 minutes, add salt and pepper to taste
remove from heat
slice peppers in half length wise, and remove all seeds
Place all eight half peppers in a baking dish, fill them with the chicken and bean filling
pour 1/2 cup chicken broth or water in bottom of baking dish
cover whole pan tightly with aluminum foil
bake at 350 for 30 minutes
remove foil, top with cheese, bake another 5 minutes until cheese is melted
Posted by barbara at 7:19 AM No comments: