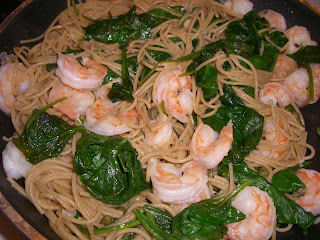 Around here Fridays become PASTA carb loading night each year around this time! Joe is running the Chicago Marathon again in about 8 weeks or so, and it has become extremely important for him to eat a dinner with about the same number of carbs as any one of Michael's meals (oh to have the metabolism of an 11 year old boy!). Michael eats anything he wants and stays slim, Joe eats as many plain pasta carbs as he can on Fridays and runs like 15 miles the next day to take care of any "overages". I eat six noodles and gain six pounds - Barbara eats six plain noodles and gets stomach pains for a week. Life is fair that way. As Jacob screams frequently fair ... THAT'S UNFAIR ... then outta nowhere last night Jacob comes up with this "Jenna, Life isn't fair". WOW, who are you?
Anyway, this pasta dish does have some nurishment mixed in - you can get some really powerful iron between the shrimp and the spinach (the six ounces of shrimp actually gives you four times more iron than the one and a half cups of spinach ... shoulda told PopEye that along time ago! - imagine PopEye running around eating Shrimp Coctail instead of those gross cans of spinach). So many of us do not get enough iron - and that is something that can really catch up with you. Additionally, there's great protein in this meal, which is actually really important to an endurance athlete, because once the body runs out of quick carbs (like this meal packs in), the body turns to other energy sources stored in the muscle. Eating protein before and especially after a run is essential for muscle recovery. Lighter meats like this shrimp are easier for the body than heavy beef.
Angel Hair Pasta with Shrimp and Spinach
8 ounces uncooked angel hair pasta (unless you're feeding Joe or Michael, then use more!).99
1 pound peeled and deveined large shrimp $3.99
1/4 tsp salt.02
1/4 tsp black pepper.02
2 Tbsp olive oil .40
1/4 cup finely chopped onion .20
1/2 cup fat free, reduced sodium chicken broth .20
2 Tbsp lemon juice.40
1 lb frozen chopped spinach $1.09 or 1 lb fresh spinch $2.08
2 Tbsp capers .40
Cook pasta according to package directions. Drain
While pasta is cooking, sprinkle shrimp with salt and pepper. Heat oil in a large nonstick skillet over medium-high heat. Add onions; saute 30 seconds or so. Add shrimp; saute for three minutes. Remove shrimp/onions from pan. Add chicken broth and lemon juice to pan and scrape pan to loosen any browned bits. Add cooked pasta, spinach, shrimp and capers. Heat 1 minute or until spinach wilts slightly. Stir frequently.
Serves 4
450 calories
Fat 10 grams
42.3 g carbs (with plain angel hair pasta)
47 grams Protein
Posted by Kim H. at 8:34 AM