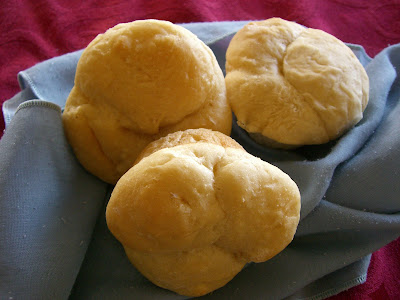 My Mother-in-law makes these rolls which are, incidentally, found in the cookbook my Mother typed for the church I grew up in during the year in which Joe and I were married.  WOW, that's alot of memories and family tied together in one little recipe.  Seriously, my Mother-in-law is a great baker, and this is the recipe she really uses for all the breads that she makes ... sweet rolls, bread, dinner rolls, etc.  and it's pretty simple, really.

If you're in the 1930s and have unpastureized milk, then heat milk until scalded - if you're making this in 2010, then just warm your milk slightly (like 1 minute in the microwave).  Add sugar and salt to the milk - allow to cool.  Soften 2 packages dry yeast in 1/2 cup of lukewarm water.  when the yeast is starting to "grow", add to the cooled milk mixture.  Add 4 cups of flour and cover with a towel - sit in a warm space and let raise to bubbly stage. Add butter, eggs, and the next 3 cups of flour.  Knead in only as much additioanl flour as needed to make a dough that can be handled using small amounts at a time.  Allow to raise to double in bulk (an hour or so?).  Shape into buns, cinnamon rolls, braides, or any type of rolls you want.
Bake for 25 minutes at 375 degrees.

So, for those of us not used to making breads or our own dinner rolls...a few tips.
to make great "clover leaf rolls", spray each cup in your cupcake pan, pinch off about 1 tbsp dough, using as little extra flour as you need, roll into a small ball, repeat two more times so you have three balls - put into a sprayed cupcake cup, repeat to fill pan  allow to raise, and bake.
cinnamon rolls are a breeze with this recipe - just roll about half the dough (mixing with flour as needed to roll) into a long rectangle, spread with a bit of butter, some brown sugar, and cinnamon to taste, or just use pre-mixed cinnamon sugar.  Roll long sides to long sides making a long tube.  cut into slices about 3/4 inch thick - put on a baking sheet and allow to raise and then bake.
For bread you can just place the dough into two 10 x 13 loaf pans.  again, allow to raise and then bake.
Posted by Kim H. at 10:37 AM

Email ThisBlogThis!Share to TwitterShare to FacebookShare to Pinterest
Labels: sides